Sabancı University Center of Excellence in Finance (CEF) established with the founding sponsorship of Akbank held another seminar as part of its series with one of the most influential names in finance. The speaker in the event was Chris Skinner, one of the most prominent figures in financial technologies. Independent analyst Chris Skinner, known for his financial markets and fintech blog thefinanser.com and bestselling books Digital Bank, ValueWeb and Digital Human, gave a seminar titled "Digital Activities of Banks - Lessons from Leaders" in Istanbul.

Skinner, who is also the President of the Europe-based The Financial Services Club and Nordic Finance Innovation, spoke at the Sabancı Center on Friday, March 15, 2019. Attending Skinner's lecture on the process of digitalization in the global banking system were members of bank treasury departments, intermediary institutions, import-export companies and trading desks, in addition to faculty and students from various universities.

Skinner said, “There is a small group of banks that are transforming into digital banks. We can all understand that doing so is a great challenge for banks that have been established decades ago and have thousands of employees and millions of clients. What are they doing right? How do they do what they do? How do we know they are digital banks? Is there any way to follow them?"

Sabancı University Chair Professor of Finance and CEF Founding Chairperson Özgür Demirtaş expressed their pleasure to host an influential analyst and writer like Chris Skinner, who is widely regarded as the "most powerful name in financial technologies." Professor Demirtaş continued, "CEF organizes certificate programs and seminar series on finance. CEF has already become a leader in finance education in Turkey", and emphasized the potential contribution of attending a lecture by Chris Skinner to the audience. 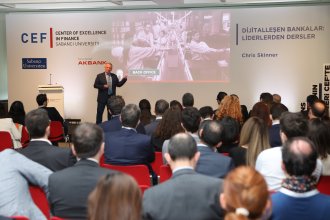 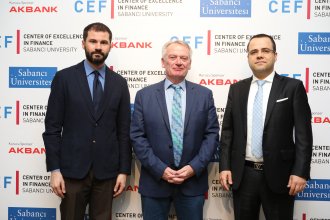